The drug crime lab in St. Paul suspended drug testing in July when it was discovered employees weren’t following any written procedures and may have been using machines tainted with cocaine. Since then, many cases have been reviewed in an effort to substantiate results from the troubled lab. Now, officials say they’ve found one case in particular where the results were flawed. 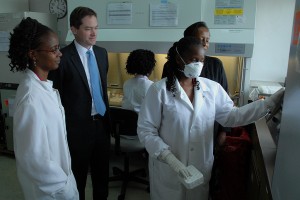 According to Minnesota Public Radio, 26-year old Pahoa Yang was pulled over while riding in a stolen car in April of 2011. Officers found a glass pipe and white powdery substance on Yang, who explained that the pipe was used for smoking methamphetamines.

The St. Paul crime lab determined the baggie of white powder was .38 grams of meth and Yang was charged. She was facing fifth-degree possession charges. This carries up to 5 years in prison and $10,000 if convicted.

This year, following the troubles at the lab, officials began testing 97 cases that had been processed there. Yang’s case is the first in which a problem was discovered—the substance was found to not be meth.

Since the discovery, her charges have been dropped.

It isn’t clear who is to blame in her particular case, though MPR cites a few names that have previously been tied to the lab problems. Sgt. Shay Shackle, the former lab supervisor was listed on a roster of witnesses in the case, as was lab analyst Roberta DeCrans.

Of the flawed results, Washington County Attorney Pete Orput cautioned against assuming there were more like it.

”It could be a fluke. I don’t know,” he said. ”If it looks systematic then obviously you know that’s going to take us in another direction, but I can’t even speculate right now because I don’t know what it means.”

Assistant public defender Pam King, however, was less likely to call it a fluke, saying that more testing should be done to determine just how many other tests could be flawed.

”How many other answers did they get wrong? How many people pled guilty relying on information that they thought was reliable from the crime lab when it wasn’t reliable information in the first place?” said King.

It’s crucial in all criminal cases that the evidence be treated with extreme adherence to procedures and policy in order to ensure the rights of the accused are protected. When a “mistake” like this one happens, someone’s life hangs in the balance.

Drug lab issues are a disturbing trend nationwide, none bigger than the one in Massachusetts. Most citizens and jurors have have a base assumption that the scientific evidence being presented in court by the state is reliable, but those assumptions need to be seriously questioned.

If you’ve been accused of a drug offense—whether it’s something as simple as a possession charge or if you are accused of distribution—we may be able to help. Contact our offices today to discuss the details of your case and your legal options.