Drones first came into the public’s view through the military variety that were (and are) being used to take out people half way around the world. But, now we are seeing very similar airborne robots in our domestic skies. The use of drones by law enforcement is increasing and action by lawmakers to limit their use is similarly rising.

In Minnesota, three Republican lawmakers are working to get legislation passed that would limit how law enforcement in this state could use drones. 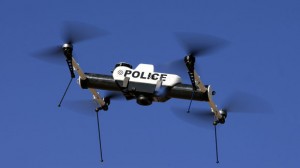 According to the Associated Press, the legislation was introduced on February 14 and would allow citizens to sue police agencies that violated the restrictions set forth. It would also bar law enforcement from using information gained from done use in a criminal trial. But, the bill wouldn’t stop police from using the machines altogether.

Drones are small robotic aircraft, piloted on the ground. In the world of law enforcement, it’s said they could be used for surveillance, monitoring weather and damage from natural disasters, outfitted with heat sensors to identify potential grow houses, or spy on protestors. While they could be used to find a missing child, they could just as easily be employed to spy on the general public. And this is where civil liberties advocates are concerned.

Usually, we don’t see lawmakers jumping to respond to privacy issues. But in the case of drone use, lawmakers across the country are drafting legislation at break-neck speed to stay ahead of law enforcement.

Police agencies are getting federal money to purchase the drones and the FAA is encouraging them as well. According to the New York Times, the FAA has received 80 requests so far for domestic drone usage.

Some states would like to see drones barred completely, but most are looking for compromise. Many states like Arizona are trying to set up regulations that would limit usage and dictate exactly how and when the little flying robots could be employed. Of course, some state Governors appear to be fully on board with unlimited police drones, such as in Virginia.

As for the Minnesota legislation, it would reportedly allow police to use drones in the case of terrorism investigations, when a warrant is present, when life or property is in imminent danger, or when the ability to apprehend a suspect is similarly at risk. Unfortunately, these exceptions are pretty wide reaching.

Many anti-government organizations or even those that challenge the status quo could be characterized as terrorist under the right light and with the right wording. Similarly, it wouldn’t be difficult to manufacture circumstances where life, property, or the ability to apprehend a suspect could be at risk.

While some rules governing drone use are needed, it’s not clear if proposed legislation goes far enough to protect the people.

When you are under investigation, whether cops are using a drone or simple surveillance, you still have rights. Whether you are suspected of dealing drugs or assaulting your spouse, we may be able to help. Contact our offices today to discuss your case.