The city of St. Paul agreed to pay a man and his mother $400,000 in an agreement to drop their lawsuit. This isn’t the first such settlement to come from the city of St. Paul in recent months, begging questions about the current state of police ethics in the city. 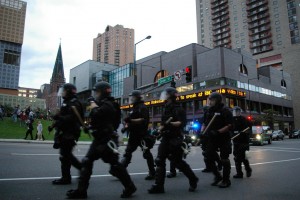 According to the Pioneer Press, this particular settlement came after a brutal raid on the home of 28-year old Larelle Steward and his 48-year old mother Daniela Hobbs. The raid happened because Officer Matthew Yunker had received information that a 58-year old man was selling crack-cocaine out of the apartment where Steward and Hobbs lived.

Yunker obtained a warrant and raided the apartment in October of 2010. Steward and Hobbs were the only two home at the time. Steward was ordered to the ground and his hands “zip-tied” behind his back. His mother, recovering from neck surgery, with diabetes and back problems, struggled to get to the ground as police had ordered. When Steward spoke up in her defense, wanting to tell officers why she was moving slowly, he was kicked in the back of his head repeatedly, smashing his face into the floor, cutting it and breaking his nose. They then covered his face with a pillowcase.

Rather than notice the obvious surgical injuries to Hobbs, they shot a flash-bang grenade at her to get her to move more quickly. The grenade set Hobbs on fire. It left third-degree burns on her legs and feet.

At the scene of the raid, EMS workers tended to Hobbs and were told by police that no one else needed their treatment. However, after it was all said and done, police dropped Steward off at the emergency room, finally removing the pillowcase used to cover his face and taking it with them as they left.

No crack-cocaine was found. There was a small amount of marijuana and several weapons, though neither Hobbs nor Steward were charged.

Last year the city paid out $350,000 in police misconduct cases; there were five cases in all. The last $400,000 settlement came in 2005 after a police officer mistook a carjacking victim for a suspect and killed him.

The St. Paul Police Department didn’t indicate whether or not there was an internal investigation into Officer Yunker’s raid, though no disciplinary action from the event is in his record. And, he’s been promoted to K-9 officer.

Police mistreatment happens, though we rarely hear about it in the media. If you are facing charges of any kind and you believe your rights were violated by the police, we may be able to help. Contact our offices today to discuss your case and the legal options available to you.