Most law enforcement agencies are strapped for cash these days. But a federal program has given them the opportunity to receive brand new military equipment for free; they only have to pay the price of shipping. For many, it seems like a win-win, allowing the feds to dump surplus and local agencies to get cheap equipment. For others, it’s an obvious sign of trouble in the further militarization of police. 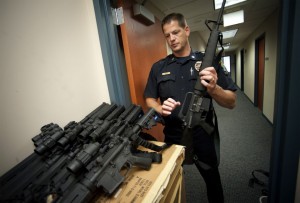 In Minnesota, many police agencies take part in the Defense Department program. From the State Patrol to small town departments—any agency which becomes a member can have free access to everything from office supplies to automatic weaponry, military Humvees, and more.

The Star Tribune reports this trend isn’t unique to Minnesota and is providing a wealth of equipment to agencies across the country.

Nationally, the value of goods obtained by cash-strapped local agencies jumped from $213 million in 2010 to nearly $500 million in 2011, and, at $419 million so far this year, it’s on pace to easily surpass that total. In Minnesota, police, sheriff’s offices and the State Patrol have acquired $1 million-plus worth of items this year, more than twice the total for the previous two years combined.

Minnesota State Patrol Lt. Ryan Carroll boasts that the program gives departments access to equipment they wouldn’t normally be able to afford, that “all the items we acquire are placed into service immediately.”

Not everyone is convinced this is a good thing. After all, the growing militarization of police will only widen the gap between the cops and the people they “serve”.

Chuck Samuelson of the American Civil Liberties Union of Minnesota says, “I have yet to see a justification for this amount of firepower, other than we can get it for free.”

What justifies this stockpiling of military weapons, some would have you believe, are the rare incidences of extreme violence where a police unit may be benefitted by a weapon that allows them to take out a suspect from a long distance away. But these incidences are extremely rare and hardly justify the weaponry.

When the police have new toys, they will ultimately want to use them. Outfitting the local and state departments with military weapons might be cheap, but the agencies are missing the big picture—that the purchases could ultimately cost them the respect and trust of the communities they are a part of. And when they lose that, the environment becomes less cooperative and more of a “us vs. them” scenario.

If you are charged with a crime in Minnesota, call our offices today for a free consultation. You deserve to have someone on your side when it feels like the system is out to get you.